Brazil (Official Tournament Poster): The artwork depicts the beauty and diversity of Brazil through a colourful, emotional and vibrant design. The creative concept at the heart of the poster is “An entire country at football’s service – Brazil and football: one shared identity”, which inspired Crama to shape the winning design. This is evident throughout the poster, particularly where the players‘ legs challenging for the ball reveal the map of Brazil.

Belo Horizonte: The São Franciso de Assis Church, part of the Pampulha complex stands out in the poster of the capital of the state of Minas Gerais. On the poster, images from the outside of the Church overlap to form the pentagons of a ball. Belo Horizonte hosted three Confederations Cup matches – including one of the semi-finals – and six 2014 FIFA World Cup games. 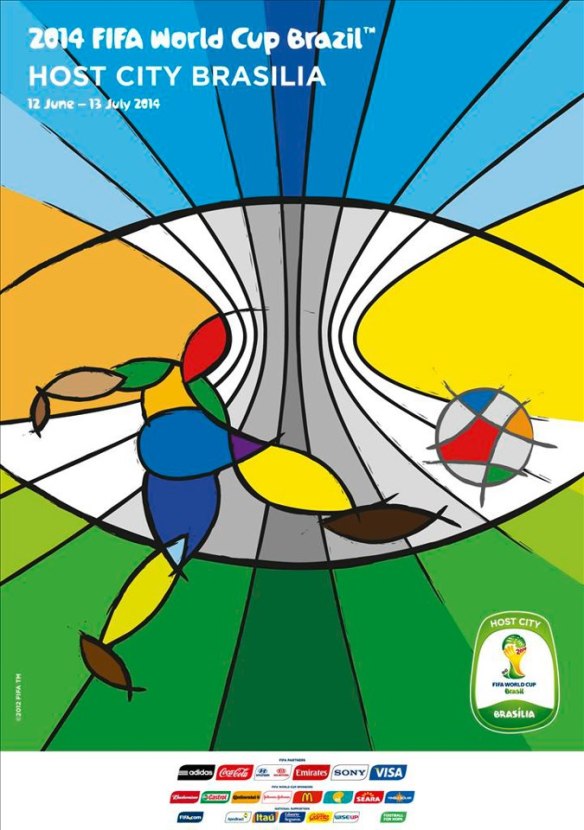 Brasilia: The image shows the Cathedral, one of the city’s symbol and considered a global architecture icon. The colours of the player kicking the ball reinforce the multiple ethnicities that make up Brazilian society and refer to the presence of the five continents at the tournament. The National Mané Garrincha Stadium in Brasilia staged the Confederations Cup opening match and seven 2014 FIFA World Cup games.

Cuiabá: On the poster of the capital city of the state of Mato Grosso, the jabiru, bird which is a symbol of the Pantanal stands out. Football is represented by the ball at the player’s feet. People’s excitement with the event is translated into the ball’s movement and the shapes surrounding it. The map of the state in the middle of the ball shows that Cuiabá was ready to host four 2014 FIFA World Cup matches.

Curitiba: The Brazilian pine, tree which is a symbol of the city and of the Paraná state, is omnipresent in Curitiba’s poster. In all, 34,949 people took part in choosing the official poster, voting on the City Hall’s website. The city hosted four 2014 FIFA World Cup matches.

Fortaleza: The ball that looks as if it is being launched out of the Castelão is the image of the capital of the state of Ceará for the 2014 World Cup. The football carries the city’s main symbols. The textures and lines used in the drawing refer to a modern city that does not forget its traditions. Fortaleza hosted three Confederations Cup matches – including one of the semi-finals – and six 2014 FIFA World Cup games.

Manaus: Two red parrots sitting on the crossbar summarises the relation that Manaus’ poster tried to portray for the World Cup: showing that, at the heart of the world’s largest tropical forest, everyone roots for nature. The capital of the state of Amazonas hosted four 2014 FIFA World Cup matches. 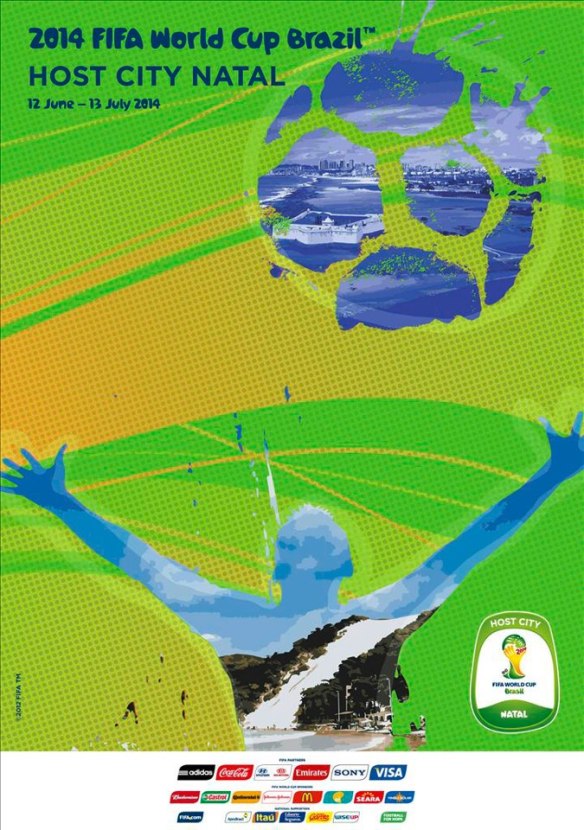 Natal: The green of the forests. The yellow of the warm sands. The blue of the sea. Located at the eastern corner of South America, Natal’s poster shows that they waited for the event with open arms. The picture portrays the Careca Mountain, at the Ponta Negra beach, one of the city’s best known landmarks. Natal hosted four 2014 FIFA World Cup matches.

Porto Alegre: Porto Alegre’s poster brings a player kicking a ball and the picture of the Gasômetro Plant, which represents the grandeur of the event and its legacy in relation to cultural and economic wealth, as well as technological and infrastructure development. The people on the poster, looking excited, represent the passion that Porto Alegre locals have for football. The capital of the state of Rio Grande do Sul hosted five 2014 FIFA World Cup matches.

Recife: Recife’s poster is full of moving colours and refers to the frevo, which is one of the state’s most famous cultural manifestations. With a small umbrella in hand, the frevo dancer performs light and agile movements, similar to acrobatics pulled off by footballers. Recife staged three Confederations Cup matches and five 2014 FIFA World Cup games.

Rio de Janeiro: Rio de Janeiro’s poster, chosen as a result of a national contest, represents the essence of the Carioca (people from Rio), “moving with the rhythm of the sea and with the energy of the nature that surrounds him/her, as well as the heat from the sun”. The silhouette and the ball form a heart, which is at the centre of several layers, expressing the love the Carioca feels for football. Each layer represents an aspect of Rio: the beach, the Sugar Loaf Mountain, the sea and the sky. Rio hosed three Confederations Cup matches and seven 2014 World Cup games, including both finals. 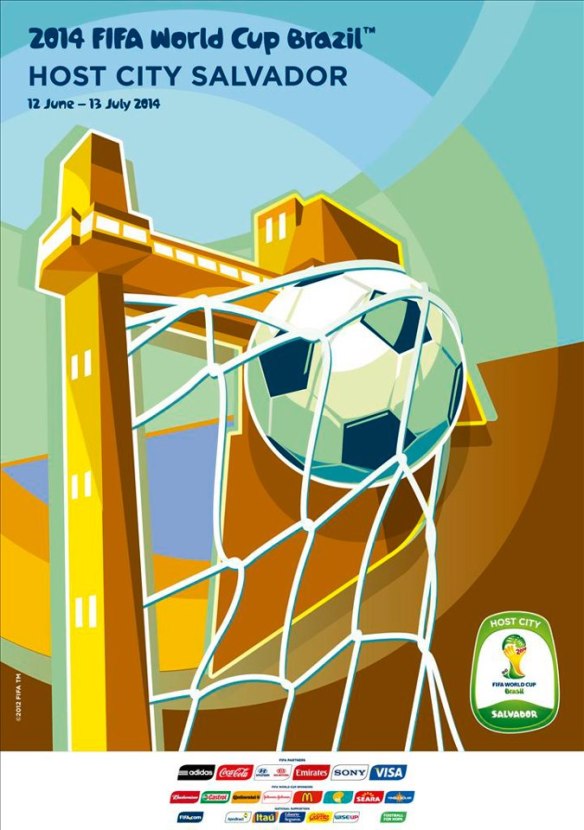 Salvador: The Lacerda Lift turned into football goal posts and a ball being fired into the net stand out in Salvador’s poster. From the height of the towers of the world’s first public lift it is possible to see several of the city’s tourist sites. Salvador staged three Confederations Cup matches and six 2014 FIFA World Cup games.

São Paulo: The cosmopolitan and multiple features of São Paulo stands out in the city’s poster. The image reflects a metropolis where thousands of people live, celebrate and breathe football. Football is in the city’s blood, streets and its sea of buildings. São Paulo hosted six 2014 World Cup matches, including the opening game with Brazil.